Independent since 1993 and the peaceful division of Czechoslovakia into two entities, Slovakia is about the same area as Switzerland, but less populated (5 million inhabitants).

I went there twice, and twice was my Slovak experience limited to a visit of its capital city: Bratislava. It was in the years 2010 and 2013. I came twice from Vienna, the capital city of Austria. It made sense as I was studying in Vienna and Bratislava is a mere hour away from Vienna by train or bus, less than two hours by ferry. I opted for the train in 2010, for the ferry in 2013.

I went there shortly with other fellow students in 2010. The late October weather was unappealing, but did not prevent us to visit a decent number of museums and enjoy the city centre, castle included, on a day trip. 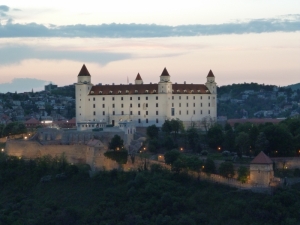 The 2013 experience was less in a rush, as we went there on the not-that-blue Danube in a ferry with my future wife. To be consistent, we slept in a boat on the Danube in Bratislava, near the famous Most Slovenského národného povstania, known in English as the bridge of the Slovak national uprising, and nicknamed “UFO bridge”. It is characterized by the presence of a restaurant on its top, 84 meters over the river Danube, a restaurant whose shape resembles a flying saucer, hence the nickname. The food at the restaurant was outstanding, so was the Slovak wine. We got fireworks at dessert time. Was it just to celebrate our arrival? Not sure. After the boaty night, we enjoyed the lovely May weather and indulged for a huge lunch platter. After a while, we had a Cornelian choice: to finish the food or to finish the beer, knowing that our stomachs could not handle both. As hydration was important on that sunny May Day, we chose beer.