One Kingdom, three nations: Denmark (Danmark, in Danish), Greenland (Kalaallit Nunaat, in Greenlandic) and Faroe Islands (Føroyar, in Faroese). Three nations with distinct cultures, languages and landscapes. Counting Greenland’s more than 2 millions square kilometres, Denmark would be the 12th biggest country on Earth! Without Greenland, it drops to position 130, just ahead of Switzerland. Faroe Islands is the smallest of the three nations, with its 1399 square kilometres. Giant Greenland and tiny Faroe share a common point: population – about 50,000 in each case, thus hundred times less than the nation of Denmark.

My first Danish experience took place in 2010 on my way to Iceland. It was an unexpected night stay in a hotel near the airport, as the flight to Iceland was postponed until the next morning. Not seen much.

The second stop was more prolific, on my way back from Iceland, as it was a 3-nights stopover, including an international football game between… Denmark and Iceland! I got the opportunity to discover the colourful Nyhavn district of Copenhagen, but no little mermaid, as she was in Shanghai for the Universal Exposition. That stop gave me the chance to visit Hillerød and its exquisite castle by the lake, Castle Frederiksborg.

Many other short stops followed, always on my way to or from Iceland. Recently, we did a longer stop, true Danish holidays indeed, in a country within the country, Legoland. Even the French fries are shaped as Lego there! A world in its own, fun for children as for adults. As we flew from Copenhagen, we stopped briefly on our way back from Legoland in Odense on Funen Island, the home town of HC Andersen. Just one advice: whatever the island you are on in Denmark, try the pastries. Just try! Postpone your diet and try! Did I tell you to try?

Faroe Island became a target on my travel map as soon as I was living in Iceland. Just a short one-hour flight away from Reykjavík city centre, no hesitation! It was late September 2013, the birds were gone (the ones who attract tourists), so were most of the tourists. The expected windy weather did not refrain me to go by ferry or bus to most of the major islands of the archipelago, even if my stay was a short one.

The first highlight occurred during the flight, though. Free Faroese beers, free sandwich with fresh Faroese salmon. Undoubtedly the best salmon I have tasted so far (sorry Iceland). Rainbows, sheepyscapes, impressive cliffs, sheep and more sheep, a yummylicious fish soup and other yummy fish dishes, green hills and some fancy statues, that sums up my Faroese short experience in one sentence.

Last but not least, Greenland. Being located as close as Reykjavík city centre as Faroe Islands are, I did not resist long either and went there in 2013 as well. It was July. We spent just 4 days with my future wife, but I would consider it the equivalent to 8 days, as it was bright and sunny 24 hours a day. So is July above the polar circle. We even got sunburned. In Greenland. Read it again. Yes. You read it right. The flight itself was a highlight, not for salmon or beer, but for iceberg spotting and flying over the massive and impressive island of ice. 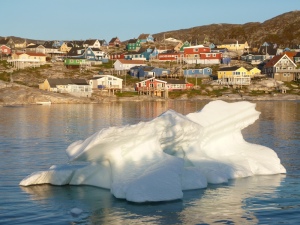 Destination: Ilulissat, west coast, the third largest “city” with its 5,000 inhabitants. A truly amazing place with the nearby Ilulissat Icefjord, a UNESCO World Heritage site. An icefjord that let you speechless by its beauty, an icefjord that forces me to use the dictionary of synonyms to describe it properly: gorgeous, splendid, magnificent, grandiose, imposing, impressive, majestic, outstanding, sublime, sumptuous and superb. To say the least! A midnight cruise in the bay, amongst the iceberg coming from the icefjord, is a must-do! The same goes for a (few hours’ boat ride north) day trip to Eqi glacier, Greenland’s answer to Argentina’s Perito Moreno, with its huge blocks of ice collapsing every few minutes in the sea. A Greenlandic buffet is a must-try (not much other choices anyway), with muskoxen and seal soup coming along with other delicacies.

2 thoughts on “Tales from the Kingdom of Denmark”