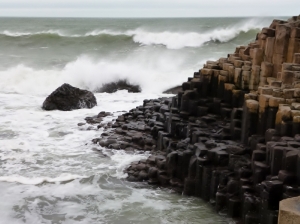 I went to Northern Ireland just before Christmas 2014 with my future wife via a direct flight from Reykjavík (Iceland). I visited Dublin, the capital city of the Republic of Ireland, in August 2015, via a direct flight from Reykjavík too. It was my first official trip abroad with my wife, as a just-married couple. The small trip to Northern Ireland was divided into two parts: Belfast and the Giant’s Causeway. No wonder the Giant’s Causeway is amongst the natural wonders of our planet, it is a truly magic place, with unique lava formations hit hard by the ocean’s waves. The kind of place that makes you feel one with the nature. The kind of place to visit briefly in December because it is kind of cold and windy. Belfast is now attracting tourists, after a long period of instabilities. Its indoor market, with live music, was a highlight, just overshadowed by the impressive Titanic museum. 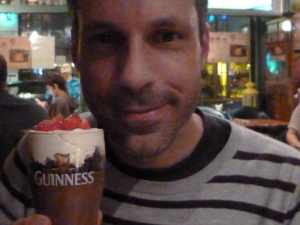 The weather was friendlier in Dublin, as it was summer. No heat wave though, but warm enough to feel regularly the need to enjoy a Guinness beer. Dublin, with its more than 1 million inhabitants (Eire being inhabited by slightly less than 5 million inhabitants) is Guinness City, and it is easy to figure it out. Guinness in every pub, Guinness sauce for the meat, I even got a Guinness chocolate mousse as a dessert. No Guinness at breakfast, even if it could fit well with the light and easy-to-digest Irish breakfast. Guinness is everywhere, live music and dance being not far away! I was lucky enough to sleep inside of the other main attraction of the city (apart from Guinness), Trinity College, home of the Book of Kells, one of the world’s most famous books, an illuminated manuscript from the Bible dating from the year… 800. The library of Trinity College is worth a visit in itself, not just for that famous book. Among other things, a cruise on the River Liffey and a dance show completed our long and nice weekend in Dublin. 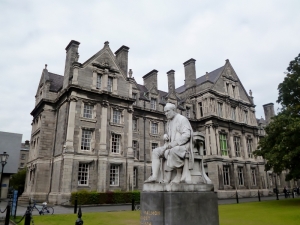